That title, I mean just look at that title. Doesn’t it conjure up a fantastic image in your mind: a rhino in a cape flys through the air, climbing tall buildings in a single stampede whilst battling evil Spider Monkeys and Giraffes in spandex. Just me? Well it will be you as well if you play the astonishing, the amazing, the extremely tall Rhino Hero Super Battle.

The original Rhino hero I had always dismissed as a kids game, which was my loss. I played it at Conpulsion earlier this year and found it to be immensley entertaining. This new version takes those concepts and turn them all the way up to 11! 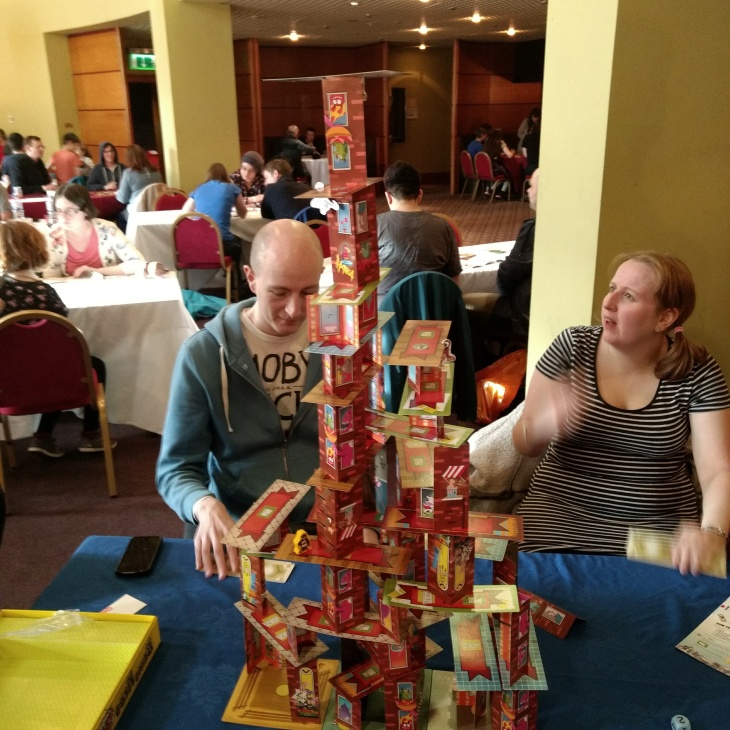 Does whatever a Rhino can

The exceptionally well priced game, £20 or less without thinking about it, contains 4 wooden heroes, including the titular Rhino Hero but also others including a Penguin, Giraffe and an Elephant, some evil Spider Monkeys, three chunky wooden six sided dice and a bunch of thick cardboard cards and stands.

Dealing each player 3 cards and getting them to grab a hero of their choice, you lay out the foundations of the game and the literal foundations of the tower you are about to climb. These can be easy or hard depending on your preference with more or less places to put your columns, will get to that.

Starting with the bases of the towers you’ll choose a player to kick off the construction. Choosing a card from hand they will then take the two walls it instructs them to, these come in tall and short flavours, and put those walls on spots on the base. They will then take the card they played and balance this on top of the two stands, maybe attaching a spider monkey as well. After this placement has happened you then roll a light blue dice to tell you how far up and down the tower you can move, 2,1 0 or -1.

Once you have moved your hero up or down the required number of levels you need to Battle with anyone else on that level. Casting your eyes over the increasingly chaotic architecture you spy your target. You pick up a red dice and your opponent picks up the blue. The red dice only has 6,4 and 2 on it whereas the blue has 5,3 and 1 giving the attacker a statistical advantage over his target and also getting rid of any potential roll off situations which is a neat trick. The loser of this battle is pushed down a level and they may stand astride their building proud in their accomplishments, at least until someone builds higher!

The winner of the game is determined in one of two ways: the hero who is highest once all cards have been played, or more likely the winner is the hero who was highest when your teetering skyscraper comes crashing down around your ears!

This seems simple and it is, but the joy of Rhino Hero Super Battle is in watching your little hero fight his way up the tower, figuring out ways to slowly increase the difficulty of following you if you are ahead or slowing down those above you so you can catch them up.

Jenga was a massive hit for a reason and Rhino Hero absolutely has that vibe to it: the careful stacking of your columns, placement of the floors, that ‘woaaah’ moment as the entire thing wobbles and the eventual cheers as the whole thing comes tumbling down.

It’s a simple, beautiful, emotional piece of design that you can explain in seconds and play in minutes then do it all over again. I thoroughly recommend this game to you!