Beyond the Veil – Carnevale of Horrors

This article will look at an individual scenario of Arkham Horror: The Card Game. These will be my impressions after playing through the scenario at least once and will be focusing on the mechanics and how those reinforce the story elements of a given scenario. These articles will contain extensive spoilers and assume a familiarity with the terms and mechanics of the game. Please do not read on if you have not played the scenario in the title yet.

Come to beautiful Venice and join in the Carnevale. A mask will be supplied to you on arrival and then you can circle the city seeing all that our beautiful town has to offer. What’s that, the missing people? Oh don’t worry about that I am sure they have just gotten a bit drunk and lost, they are bound to turn up eventually. Oh whatever you do, don’t take of another revellers mask, you may not like what you find. Hahah, I’m kidding, sort of.

The second of the standalone expansions for Arkham takes us away from America and to the city of Venice for a scenario of masks, mystery and massive monsters. Carnevale is one of the most unique scenarios in terms of it’s setup and movement as the characters will find themselves running around a massive clock of the city.

As the name suggests you find yourself in Venice at the time of a Carnevale and you are going to get literally swept up in the proceedings. Laying the locations out in a round you can only move clockwise around them as you get caught up in the flow of the festivities, a party that hides a cult trying to summon an ancient horror! 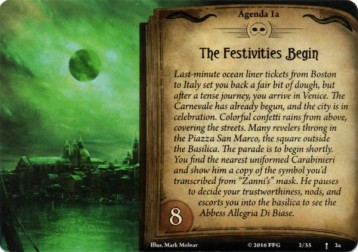 Your first task is to try and find the innocents amongst the party something you can do in one of two ways. The Carnevale-Goers are scattered around the locations so you can take your time using the action on Act 1 to have a peek or you can just rip their mask off and hope that there isn’t a cultist below the Mask! 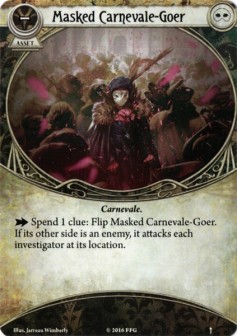 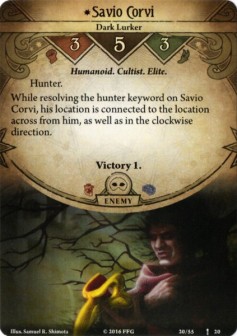 If you find the innocents you can parley them alongside you and eventually drop them back off at the Basilica, stashing them under the Act deck, or they might get horribly murdered and stashed under the Agenda. Once 3 have been found in this way, the real fun begins.

Flipping over to Act 2 the Ancient One Cnidathqua makes itself known, but for now does not attack, merely sits in the middle of a play area like a black hole. This is a big beast with a massive 8 health per investigator who will smash it’s tentacles through the streets and buildings of Venice whenever attacked.

Seeing the true horror of what the cult is up to the investigators decide that there is only really one thing for it, CHEESE IT! The gondolas down by the canal-side look like a likely escape route so once you are all there you can dive into the tiny wooden boats. Is that really a good idea? Anyway, repeating a trick from the second scenario of the core, the flispside of Act 2 has a Gondola in it and you all cramp in and paddle like madmen. 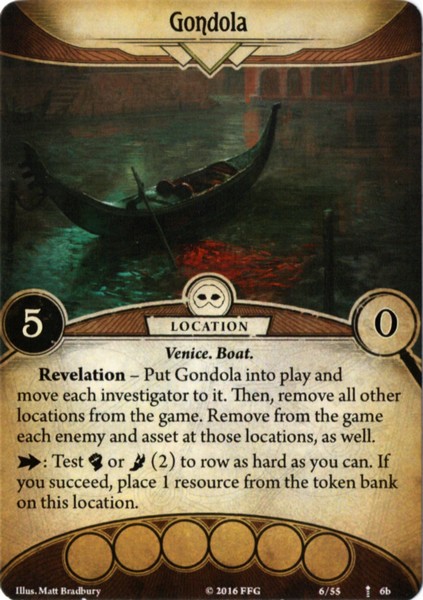 As you escape the rest of Venice disappears behind you leaving you feel very lonely in your little boat as the Ancient One speeds behind you and tries to devour you. There is a real sense of hopelessness here which I actually enjoyed, and the fact that all the locations disappear leaves you feeling you have nowhere to go and must fight to the bitter end, because that is the only choice that you have.

The encounters deck for Carnevale concentrates primarily on disrupting your main task, that of gathering the Innocent Revellers together. From becoming Lost in Venice to forcing damage upon allies the deck does everything it can to prevent you gathering the requisite number of Innocent Revellers as you can including inducing Mass Hysteria in the crowds which will shuffle all the Masked Carnevale Goers and shove them around into different locations so all your peeking at cards is for nought. Goddamn panicky Carnevale goers.

Playing a trick that we first saw in the core, the flip side of the Agenda deck has a new monster arrive and start pursuing the investigators through the party of Venice.

Many of the enemies in the deck have the hunter keyword and will pursue investigators round the clock that is the locations of Venice. There is an interesting balancing act in playing out the Carnevale scenario in that you want to stay still to gather clues, and you want to be together to handle monsters but the encounter deck frequently pushes you apart and sets you at different numbers on the clock. This divide and conquer that the encounter deck puts the investigators through is fundamental to the feel of the scenario and the final mad dash in a boat is a perfect ending to the scenario.

One time when I played through this scenario, Pete ended up in a boat alone with Duke and the only other investigator had been eliminated. The final mad dash over a couple of turns where I could have just made it away from the pursuing ancient evil felt desperate, alone and hopeless and it was absolutely perfect!

A mask by any other name

You’ve come all this way to Venice but that doesn’t mean you are going home empty handed. Oh no, you can choose from any of these fantastic masks to wear for the rest of eternity, I mean until the end of the scenario:

These masks can provide a pretty powerful addition to most decks and the main thing to notice is that they don’t take up a slot meaning you get all the benefits with none of the drawbacks, apart from having a weird mask on your face of course.

I loved Carnevale and plan to revisit again soon with some of the cards from Dunwich hoping that I will have a more successful visit than I did with poor Pete. If you are going to pick up only one of the first two side scenarios then I think Carnevale is the one to go for, though it is not for the faint hearted as even on normal it is a very challenging scenario. Best of luck, stay away from the water.

Donate to the Brain!