This article will look at an individual scenario of Arkham Horror: The Card Game. These will be my impressions after playing through the scenario and will be focusing on the mechanics and how those reinforce the story elements of a given scenario. These articles will contain extensive spoilers and assume a familiarity with the terms and mechanics of the game. Please do not read on if you have not played the scenario in the title yet. 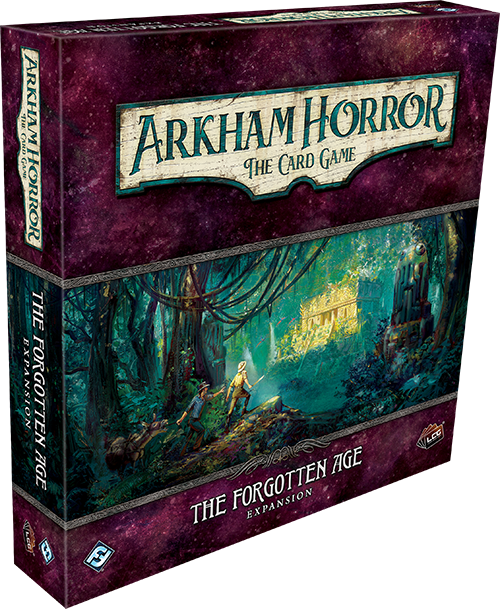 We have faced the Dunwich Legacy, walked the Path to Carcosa and now our journeys will take us into the jungles of the Forgotten Age. Dunwich was the designers showing the scope of what could be done with the system, Carcosa really played with our minds and the possibilities of the design space and Forgotten Age takes us to a more pulpy version of the Mythos. If you want to see what I thought of the base set in general you can take a look at this review, but now we are going to dive into the scenarios of the Forgotten Age, starting with The Untamed Wilds.

Our expedition begins in the jungles of southern Mexico in a search for a hitherto unheard of city state called Eztli. This would be a discovery of historical significance and as such our investigators, or should I call them adventurers in this case, head into the jungle to see what they can discover.

Right from the off this campaign introduces new mechanics as instead of a fixed map like all our previous scenarios, we start with on location and Explore out into the wilderness. The exploration deck has locations and treacheries in it and if we want to find our way out of the forest we are going to have to be able to distinguish the woods from the trauma. When you decide to Explore, an action that either comes from a location or the Act/Agenda deck, you draw cards from the top of the location deck until you either get one that connects to the location you are on, or you hit a treachery.

The other mechanics we now have to deal with are Alert, an evasion based version of Retaliate, and Vengeance. When some creatures are killed they will go to the victory display and start to add to our vengeance score that will affect the course of the campaign. Some cards will also now Seal a token as part of their effect, taking a token out of the chaos bag and placing it on the card. Sometimes this is helpful, sometimes not so much but it is an interesting direction to take the mechanics of the game opening up a world of possible interactions. Oh one more thing, we have to load up with Supplies on our journey into the jungle. These are points to spent on everything from fuel to medicine, all of which will have an effect on different stages of the story.

Setting out from base camp we trapse off into the jungle to find our way to the lost city of Eztli. This scenarios is setup as a relatively straightforward affair to show off the new explore mechanic. We advance the first act by spending clues at non-campsite locations and the Agenda allows us to explore. These first steps into the jungle also show us how important the supplies can be, as there is a very efficient action we can take on the campsite if we have bothered to bring a map. 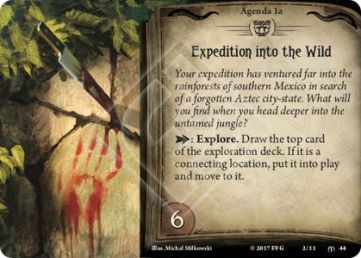 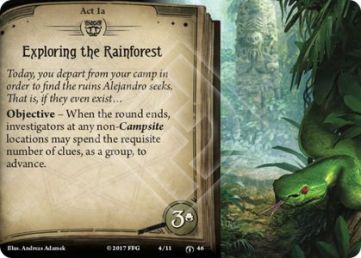 We pick our way through the jungle coming across all sorts of wondrous places, some that will cost us to travel through, others that will revive. As we explore, we realise all of a sudden that we are not alone! When Ithaca and her fellows turn up it is time for us to make our first choice. We can either try and talk to her, or we can defend ourselves and assume she is up to no good. Ithaca does do quite a bit of damage so you need to either have someone who can tank her whilst you have a chat, or just have everyone try and talk to her over the course of as few rounds as possible.

How we take care Ichataca will start to inform how the jungle is going to react to us. If we persuade her to lead us to the temple then we add a cultist token to the bag for the rest of the campaign. If we have a fight then we add a tablet token instead and get to take Alejandro Vela. This guy is rather useful so maybe we should raise our arms against the locals? There are interesting moral choices here as well as mechanical ones and the Scenario card reflects this choice. 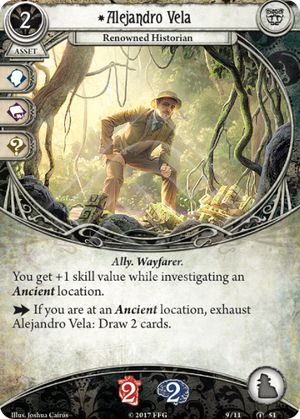 We start out this campaign with only skulls in the bag on top of the usual tokens, punishing us if we start to rack up the Vengeance. If we talk to Ichataca then things get more dangerous as we head into the jungle, but hopefully our guide will help us. Right? If we fight her then Alejandro is pushing us forwards and if we don’t listen to him we will get punished for cards remaining in the Exploration deck. He really wants to get to the temple!

Whichever way we go we get the set aside ruins cards put into play and have to pick our way through to find the Ruins of Eztli. Our choice of how we handled Ichataca will however affect the final Act we have to deal with and also how some of the encounter cards will act. If we talked to her then the Eztli Guardians cannot attack us and we also ignore the effects of an encounter card from their set. If we chose to fight then the ruins are guarded and we have a much harder time with the native people.

The Agenda deck is very straightforward, triggering pretty early to introduce the Agents of Yig into our encounter deck and take a shot at poisoning us. The scenario is relatively zippy, tolerating only 15 doom total before the investigators are defeated. You can’t hang around in a hostile jungle after all!

Our first scenario with a new set of encounter cards is always an eye opening experience. The set for the scenario doesn’t really contain much outside of the story cards for The Untamed Wilds, it is the rest of the deck that is interesting. The first thing to note is that there are very few sets used from the core set, only Ancient Evils making an unsurprising return. It seems to me (I have played some of Circle Undone by this point) that they are trying to make the expansions stand on their own a bit more and rely less on the sets from the core.

Outside of Ancient Evils everything is new in this set. The Rainforest set is full of locations for the Exploration deck and some treacheries to trip us up: Overgrowth slowing our progress and Voice of the Jungle urging us on, even if we aren’t ready! 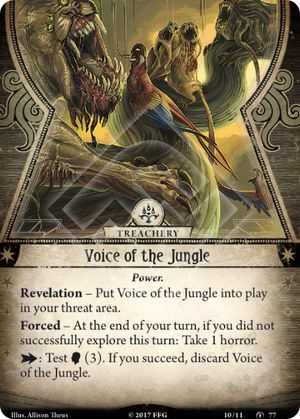 The Serpents set does exactly what it says on the tin, giving us our first taste of a Vengeance featuring monster and trying to Poision us. Poison is a new weakness you can pick up throughout The Forgotten Age and can affect events during a scenario and inbetween. I’m quite a fan of the flavour on Boa Constrictor, your exhausted cards staying that way whilst it squeezes the life out of you. 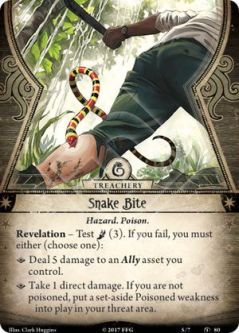 The Expedition set again affects our ability to move around, some of these cards will also go into the Exploration deck at the start of the game. Low on Supplies is a particularly horrible card as you must make a choice for the whole group, none of which anyone is really going to like and you can’t even discuss it before you choose!

I really like the Guardians of Time set. The monsters are weak but really interesting and can put out a lot of damage depending on where they spawn. Arrows from the Trees is a beautiful piece of flavour and one of my favourite cards of this particular encounter deck. 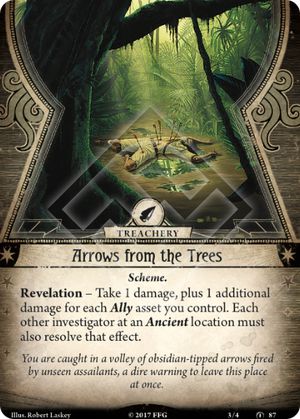 Finally we have some Creeping Poison, hitting us if we are poisoned and the Agents of Yig that come in part way through the scenario. All these cards revolve around the amount of vengeance in the victory display, teaching us some early lessons of what this new mechanic will do. Will the designers be consistent with this throughout? Certainly in Path to Carcosa they showed delight in playing with our expectations so maybe you can go a high vengeance route?

The Resolutions for this scenario are fairly straightforward, giving you access to Alejandro if you went the route of fighting with Ichataca and her men but not if you decided to parlay. You build trust with her instead, hopefully leading to her eventually joining your party down the line.

Honestly I am not entirely sure that I am comfortable with the first scenario in this campaign. Although the cast of the LCG is very diverse it still feels a little like the white man coming into native territory to grab their stuff. There is a fine line to walk and I am not sure the writing in this scenario gets it right 100% of the time leaving a bad taste in the mouth. Lovecraft has always been problematic when it comes to issues of race and that issue definitely feels like it raises its head here.

Having said that I did enjoy the exploration mechanic and the feeling of time pressure in this scenario. I’ve wanted something like the exploration deck to come into play since I first started with the Arkham LCG and I am delighted they have implemented it so well. The pulp flavour is strong throughout this scenario and it feels refreshing to have a more of an adventuring feel to the proceedings. Onwards to The Doom of Eztli!

If you enjoyed this article then please consider donating to our Patreon. Every little helps and we greatly appreciate it.

Best of the Brain