Confessions of an Amateur Designer – Focus and Pace

Welcome back to my design study. Don’t touch the books: they bite. The dog doesn’t. If you haven’t been following along with this designer diary, it is probably worth checking out at least the first article which explains what ‘This Is My Blade, Hear It’s Tale’ is all about. You can also check out the current version of the rules. The game has had a recent name change. The title Swords & Sword Story, possibly just to become Swordstory, was suggested by my brother-in-law and I am a sucker for pun titles, especially ones that tell me what the game is about.

I didn’t get a chance to playtest Swordstory at my playtest group, but I did get it to the table with my regular gaming group. This playtest showed a number of things:

Giving these issues a bit of a mull over I started to come up with solutions that I could fit into the existing hook. Coming back to the theme is useful in moments of design difficulty and I think it would be useful to go over how I look at the Focus of a game and have a chat about the Pace of a design.

For me the focus of a design has two distinctive elements: Thematic and Mechanical. For instance in Swordstory the theme is the players telling a story in a pub about their magnificent sword, and the mechanics are dice rolling, risk/reward, and manipulating the Dungeon and Shop.

It is important to keep both in mind, not only when playtesting but also when you are tweaking, changing, or rejecting mechanics. For instance: The problem of people not choosing the higher numbered cards. I had already changed a lot about the way magic (a resource which allows players to manipulate dice) worked and how people could get extra dice that way, but it wasn’t reliable and didn’t solve the problem that higher numbered cards are being activated too rarely to matter. I was considering larger dice pools, so those numbers could be more easily hit, or changing the way value declaration works.

The core of the game comes down to having your sword in front of you, the various bits of which are activated by a dice roll. On your turn you will roll two six sided dice, decide to use those dice individually or as a total, and activate any bits of your sword that correspond to that number or numbers. Every other player then activates their sword parts based on your dice roll. The issue has been that the higher numbered cards, 7 up to 12, are only really activated on your turn as there is little incentive for other players to give you an advantage. I could change the way this works so that everyone can choose how to interpret the dice roll of another player, but I think this reduces interaction around the table. 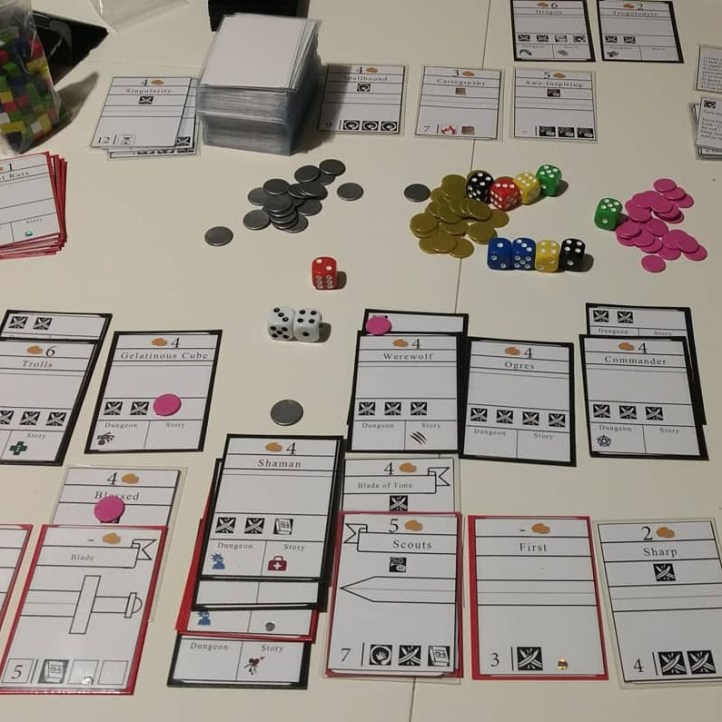 I’m hoping to solve these problems with a change in the way encounters are added to a player’s story and the number of dice a player rolls on a given turn. I could allow people to take more than one encounter at the start of their turn, then to roll 1 dice per encounter in their story. This should mean that most turns people will be rolling 2d6 or more depending on the number of encounters they have risked taking. I justified this by thinking about my theme of the pub environment: If your story is more dramatic, people are more likely to pay attention.I realised that the dice pool the players were rolling was effectively the audience they had in front of them at any given moment. With this framing, everyone using the same dice result represents one player having the spotlight, and everyone else trying to steal attention with their own examples of similar derring do.

I hope, and a solo playtest shows this may be the case, that simply rolling more dice will mean that players are more likely to take the higher numbered cards as more dice mean they can hit higher numbers while still activating lower numbered sword parts.

The solution should also help with the Pace of the game. To me, a game should engage you from the off and hold your attention throughout, no matter its length. I was finding the game didn’t feel dramatic enough to start with, but the end game felt pretty good. Rolling more dice early on should allow players to do a lot more.

Early tests have shown that the difficulty of monsters in the dungeon increases slowly overtime due to self selection by the players. They take easier monsters early on to get money, leaving the more difficult encounters in the dungeon until they feel ready. This is a great emergent mechanic which I absolutely want to keep, as it means the stories come to epic conclusions.

Another mechanic I am considering is making the buying new sword parts phase of each player’s turn into a ‘everyone can buy parts now’. I would still start with the player who rolled the dice that turn and probably refill the shop after each buy. Thematically I am starting to think of these things are all happening at once. When the first player rolls dice and other people use them they are trying to take away from the impact of the first player’s story. Mechanically I think it means the swords will come together quicker, there will be a better pace throughout the game, and it might mean I have to make the monsters a bit tougher.

The Rules They are A-Changin

At the moment I am pretty happy with the core of the game. The solo test I did seems to point to extra dice being a good thing, but I will have to play with a group to see if that bears out. Players have enjoyed the sword-building hook. I even have a good pitch for the game, something I firmly believe in keeping at the forefront of your mind when developing a design.

I am currently trying to make wounds work better. Originally they were just negative points at the end of the game, but I’d like to make them more risk/reward as well. I’m going to test a mechanic where you take the wound from the shop as before but it hits you in the head, arms, legs or torso. You get extra points if you come out a bit wounded, but negative points if you’re too wounded in a given location. Again this ties it back to the idea of telling an epic story.

I’ve also changed magic, which is a resource used to manipulate dice. As it stood you could get to nearly any number on a dice with the correct application of magic so I’ve taken away one of the uses for it: being able to add or subtract a single digit from a roll. However, I have also made it cheaper to add extra dice to a roll in the hope that this will help with the ‘higher numbers not being rolled’ problem.

I feel like I’ve definitely made progress recently, but there is a still a fair way to go. Hopefully by the time I post another one of these I’ll have solved the wound problem properly, seen the game played a few more times, and started ironing out the language in the rules more. If you are down at Expo and fancy a game do let me know, and I will try and accommodate you. I’ll have a playtest set with me.