Games Expo is a bit of an overwhelming experience. There is so much to do: games to play, stalls to buy from, delicious foods to be eaten (man those bhajis)but mostly the games. Last year I wrote a few articles about the con itself including a breakdown of one afterwards wherein I talked about my dislike of the long demos I was being offered at most stands. Let’s dive into this a bit more and look at why I think full demos are a bad idea and what I think a good demo should be.

At a con like expo or similar there is a cornucopia of games and activities to engage with so making yours stand out from the crowd is really damn hard and the first step of doing that is having a good pitch for your game straight in your head.

A good, refined and enthusiastic pitch to the customers you are going to meet is the first step in getting them enthusiastic about your game. This should short in length but get over the salient points of your game: what’s the theme, what is the game about? As an example of the sort of thing I think works, let’s have a look at one for the game I am currently working on ‘This is my Blade, hear it’s Tale’. I think my pitch would go something like this:

‘Each player is an adventurer sitting in a tavern, telling the tale of the beautiful blade they have come by. Through a series of Machi Koro style mechanics, you will build a blade, defeat monsters and avoid traps. The adventurer with the best story at the end of the game will win and get a free room for the night, because after all adventurers are nothing if not frugal’

That’s ok isn’t it? Well not really. First mistake I make there is mentioning another game. What if the person you are pitching to has never played that game or even worse what if they have played that game and the spend the subsequent demo constantly comparing your game to that one. Neither have great outcomes for you. I also describe the flow of the game the wrong way round, and here is where a refined pitch I think is really important. You can plant the seed of the mechanical flow even at this early stage of reeling someone in and you should be as consistent as possible from beginning to end.

The other thing you absolutely shouldn’t do is say your game is better than another as part of your pitch. Not only is it mean spirited in the extreme, what if the game you are putting down is that person’s favourite game? Guess what, everyone is different and your opinion is not sacrosanct as to what games are good or bad. Don’t do it.

‘Each player is an adventurer sitting in a tavern, telling the tale of the beautiful blade they have come by. Starting out with a simple sword you will encounter vicious monsters, deadly traps and intriguing rooms using the gold from defeated encounters to expand and enchant your blade.  The adventurer with the best story and biggest blade by the end of the game will win and get a free room for the night, because after all adventurers are nothing if not frugal’

Much better. You’ll notice I don’t even talk mechanics here, I don’t need to, but you can always start talking about that side of the game if they ask. What you are aiming to do here is get the customer intrigued enough by the pitch to want to learn more and it is then when we can lean into the explanation a little harder and see if they want a demo.

I would say that at this stage if they don’t seem to want to engage any further, have something you can hand them. A flyer that breaks the game down, a business card, whatever suits you and your game best. Don’t do the hard sell, it doesn’t work and it makes you look desperate. 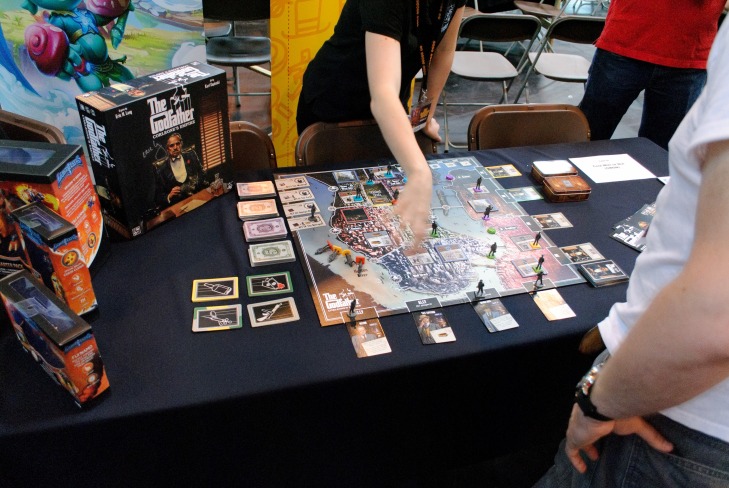 Once you have the customer reeled in a little you can talk to them more about the game, give them a brief overview of the game, enough to get them to sit down at the table and try a demo.

Walk them over to the demo table, if your stall is big enough for such a thing, let them pick up components and give them a bit more of a breakdown of the game. Again this is very pitch like so keep it brief. Let’s turn to my Blade game again and imagine a new example:

‘On your turn you’ll grab an encounter from the dungeon and add it to your story. Rolling a couple of dice you’ll then activate parts of your blade based on the resut and start to tackle the various encounters in your story. Gold from the encounters will allow you to buy sword parts’

Whilst giving this explanation I would pick up cards move them around, roll the dice, point to the bits I’m activating etc. maybe hand the customer bits of the game to look at. If you see that glint in their eye of enthusiasm and understanding you have them and you can offer them a demo. Again if you don’t, let them move on, they have other things to do and they have been good enough to give you some time already, hold the customer lightly in your hand.

Do you have them? Do they want more? Have they already taken a seat? Excellent, let’s move onto the meat of this particular advice sandwich.

Right this is the core of what I’ve been wanting to talk about, but it is important to build the foundations before we put the roof on it, cliche I know, but the analogy works.

A good demo should be a trailer for your game. What does that mean? First and foremost it means you do not have to start at the beginning but you need to give the players a good account of the game, hopefully enough to encourage them to buy, or back the game.

Constructing a good demo can be as hard as designing a great game and you should have this thought at the front of your mind: leave them wanting more. You don’t need to show them the setup, the end or indeed any particular part of the game just enough to get them intrigued.

If you can I would ideally have this setup, assuming a game of a reasonable length of course: have a demo table for short demos and then have a schedule of longer games that people can sign up for, maybe in the same place, maybe in another location. This allows people to get a full play of your game if they want it, but doesn’t distract from the churn of people you want going through your stall.

Since I don’t know exactly how ‘This is my Blade, hear its Tale’ is going to run, I can’t give you a totally accurate example of how this stage might look for it. I think it would probably be like this: lay out 4 blades, game can take up to 6 but I assume space would be at a premium, all partly created with an enchantment on part of the blade. I’d make sure the dungeon was laid out so that it showed off a big monster, some little ones a trap and a room and I would make sure each player had some story cards in play already.

How you explain things is important here but I would absolutely make sure you have as many player aids as you think are necessary and then maybe some more on top of that. Explain the rules slowly and deliberately but get the players into the game as quickly as possible. In the setup I have above I would hand the dice to a given player, let them make the first roll and then start explaining rules from the off. That is the thing to do, engage the players, explain as you go and let them takeover and make decisions. I would hope by turn 2 or 3 player they would basically have the system down pat and that the whole demo would be over in about 20 mins. I personally find long demos off putting, especially when I am surround by hundreds of stalls to look at, so the shorter you can make your demo and still have an impact, the better.

Do not, whatever you do, play the game for the players. What is the point in that? If you are going to give me a real life Watch it Played, what do I get from that? The entire point of these people coming to the con, and to your stall, is to interact with fellow gamers across a board. If you tell people how to play your game rather than explaining it’s rules, you are doing them and you a disservice. Let them make mistakes. Let them experiment. Let them stretch and bend the rules. Let them play.

In the end a demo has one purpose, to sell an idea to the customer. Maybe that is ‘let me sell you the game you just played’ or ‘here is when I’m going to Kickstarter’ or maybe just ‘would you like to follow me as I develop this game’ but whatever the reason you’ve gotten this far so it’s time to wrap it up. Put the game in their hands, a flyer in their bag or a business card in their wallet.

I’ll repeat my advice from earlier, don’t hard sell. Maybe they played the demo and loved it, but it’s also possible they found it wasn’t for them and you know what, that is fine too. You may have made the best board game of all time, one that will go down in history, but some people will still not like it. That is just a side of any creative endeavour you are going to have to get comfortable with, and if you aren’t, then you might not want to start down this particular road.

All this advice comes from a place of love. I want to see you succeed in selling your game, even if that game is not for me. The industry and culture of tabletop gaming is made better by diversity in all aspects of its nature and the art of selling your game is as important as the game itself: without it who is going to know about your idea? I hope I have given you something to think about: how you pitch your game, how you demo it and ultimately how you sell it and yourself to the gaming public.

The Giant Brain is an independent tabletop game review site based in Scotland. We are also the home of the Brainwaves podcast, a fortnightly cast bringing you the best in tabletop gaming news. If you would like us to review a game then go to Contact Us in the top or footer menu.