Have you tried turning it off and on again?

Netrunner is back folks, and with a vengeance. This slick, elegant and strategic two player game had lost me a few months ago with a competitive meta that I didn’t enjoy playing in but a recent announcement of a Revised Core and new cycle of cards has peaked my interest in the game again. Boot up you deck, login and lets look at why you should look again if you are a lapsed player or jump in if you are yet to get the Netrunner bug. 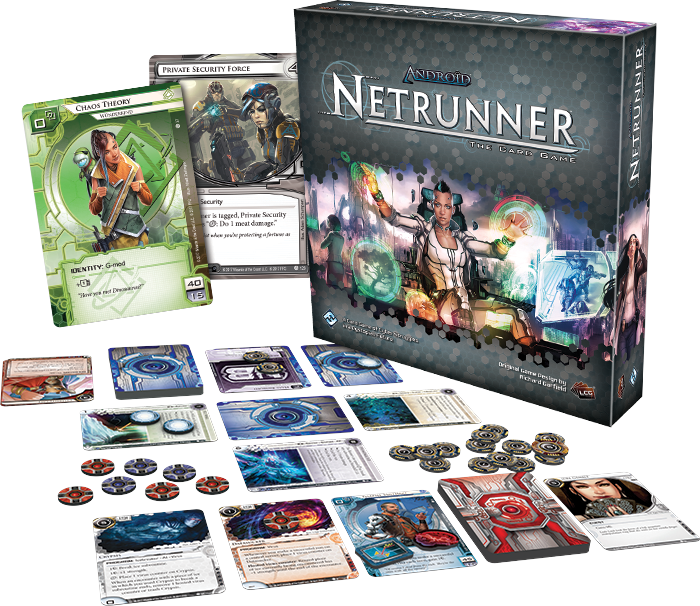 Netrunner, how does it work?

First things first, what is Netrunner and why should you play it? The original design came from Richard Garfield, the man behind Magic: The Gathering, and was also a two player CCG, when such things were in vogue. However unlike Magic, you played two very different sides in a game of Netrunner. One player takes on the role of the Corp, protecting their precious secrets, in the form of Agenda cards, and trying to bring them to fruition. On the other side is a bold hacker, trying to break into the corporate servers and steal these Agendas. First one to get a set number of Agenda points was the winner.

The game had it’s hardcore but never really picked up as much as Magic, which of course is still around to this day. Thankfully it did not die away completely and Fantasy Flight Games picked it up a few years ago and transported it into their Cyberpunk universe, Android. They did a load of work modernising the game, introducing factions on both the Runner and Corp side so that rather than just having the dual sides maybe you would be playing the Anarch runner Noise versus the Bioroid manufacturing HB or the wily Criminal Gabriel Santiago would go up against the global information network NBN.

The reimagined game evolves over time, with regular releases and rules updates from FFG. The game is part of their Living Card Games (LCG) model, with themed cycles released over several months, slowly evolving and shaping the game. Each cycle of 6 packs tends to have a theme around it, so the last one was called Red Sands and was based on Mars and the forthcoming cycle is going to be set in Africa. FFG have done an incredible job in the games representation of gender and race, but simultaneously doesn’t make a big deal out of it. Beautiful, considerate design.

You spin me right round

So what’s this Rotation nonsense. Early on in the development of Netrunner it was announced that they would eventually remove some of the older cards as newer cards entered the card pool. Many games do this in order to keep the card pool relatively small, and also to change the design space for the game and keep it interesting for players.

Rotation is kicking off on the 1st of October and will remove the first two cycles from the game along with the original core. This solves a lot of problems with the design space of the game removing cards that everyone included in their decks as a matter of course and allowing new and lapsed players a way back into the game.

You see the problem with the early design of Netrunner was that the team were still finding their feet with the game, taking some of the previous version’s cards and redesigning them for their new take on the game. Some of these were excellent and well balanced, some were never played and some so powerful that they shaped not only the meta, but the design space of the whole game. This meant that the team had real trouble coming up with new cards, because some of their earlier ones were so good that you wouldn’t use the newer cards.

Rather than doing this slowly as was originally planned they have rather nuked the meta from orbit which I think is a great thing in the long run, but does rather leave us all scrambling around in the dark. A bit of a shock to the system for current players, but the perfect environment for new.

I am the Law

Alongside rotation the Netrunner team have also changed the way the Most Wanted List works. This is a list of cards that have been restricted for deck construction, and the way this used to be handled was that they made the cards more expensive to put in your deck. See when you build a deck you get a certain amount of influence to spend on bringing in cards from outside of your faction, allowing you to spring some surprises and mix it up a bit. Cards on the MWL cost you influence even if they were in faction, thus making them rarer, but still hanging around.

That is all dead. The new MWL list now has a Restricted and Banned list. The later is pretty straight forward, those cards cannot go in competitive decks. The former means that if you put one of the cards on the Restricted list in your deck, then none of the other cards on that list can be used in your deck. This is to stamp down on some of the more abusive combos out there, and will no doubt change over time as new deck types emerge.

So you have a Netrunner collection and fancy jumping back into the game, what should you do? Well if you are anything like me and have it sorted out in some way or form the first thing you might want to do is remove all the cards that are going to cycle out when rotation hits. You can find these lists all over the Netrunner sphere but I provide a link to the cards leaving the pool here for your convenience:

Personally I’ve removed all these cards and put them away in a box, not to played with again for now. I like to build decks by going through my collection so this will make things a lot easier for me.

Now you might be a bit behind in your collection, and you can catch up if you want as I am. However if you are not intending to play competitively that much then you can add the missing packs at your leisure, there is no need to jump back in hard unless you want to.

So Netrunner sounds good to you and you would like to jump on board when rotation hits? Awesome, pick up the new core which will be more balanced and a good jumping on point. Play it with your friends and see if you like it. Then you can dive into the wider world.

There are various factions in the game and you might find you like one more than another which can guide you as to what to buy next. There are several big box expansions for the game, each of which contains one Runner and one Corp faction. Those are great starting points for each of the factions in them and will give you a good base of cards to get onto deckbuilding with.

If the building your own decks seems a bit intimidating at first, don’t worry. The new core will come with some recommended decks just like the old and from there you can jump onto some excellent online resources like NetrunnerDB that will help you out with decks, show you what the competitive guys are playing and be full of advice on what cards from the latest pack are worth your attention.

If you want to practice online you can, through the distinctly unofficial Jinteki.net, which has a bit of a steep learning curve in getting familiar with it, but once you have it down you can really churn out the games and get a lot of deck testing in

Of course you don’t need to play Netrunner with just a single opponent, you will find meetups right across the country and FFG are fairly generous in their support for the game. Stores can buy kits full of alternate art cards and tokens that they can use to run casual leagues or full on tournaments.

If you are just setting out on your competitive journey I would recommend seeking out some Cache Refresh events. This is a restricted format which has a much smaller card pool, meaning it’s a good place to start with what can be a pretty intense game.

Right up to the top players in the world the Netrunner community is incredibly welcoming and friendly. You will find resources all over the net for building decks, finding advice on rules and articles on strategy, theory and the next big thing in the competitive meta.

Put on your mirror shades

Netrunner is a vibrant, strategic and tense game with a steep learning curve and an excellent community that will help you at every step of the way. Find your local group, get yourself a demo and see if this amazing game is for you. Trust me, you won’t regret it.