I thought about doing a best of the year, of doing a list of games I liked playing all that sort of stuff but honestly I haven’t played a massive variety of games this year and I’m not sure it would make for that good a read.  Instead why don’t you join me as I reflect on the year gone, on the current state of play and what my plans are for 2018. 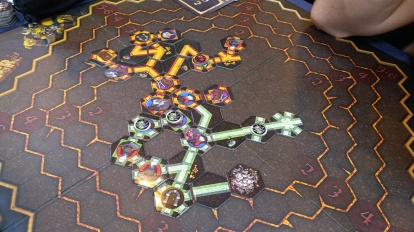 Ah poor cook, this isn’t going to go well for you. 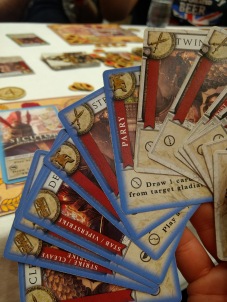 It was early in the year when I decided to focus my efforts for the site on the writing rather than designing side of my interests. I was still running my playtest group and fiddling with design but I really wanted to try and make a go of writing reviews and critique with a view to somewhere down the line getting paid for doing so (still a beautiful dream).

Switching over to WordPress was the first move and I soon had the site up and running with it’s new look. I had used WordPress in the past but had always had to get someone else to host for me, update etc. This time round I just went for their subscription service and it was a great move.

A newly revived blog and an easier to access writing interface, saw me sitting down to type out more thoughts on a regular basis and although I didn’t have any schedule in mind when I set out on this journey but I feel I’ve produced a good number of articles over the course of the year, with peaks and troughs of frequency.

I’ve had a lot of fun writing this year and I really feel like my style has really developed over this period. Whereas I started out fairly dry at the beginning my more recent reviews are finding my tone and personality better and that makes for a better read. Let’s have a look at some of my favourites.

Beyond the Veil has been a great success with many people liking the breakdown of scenarios for the Arkham Horror LCG, and I’ve really enjoyed delving into the design decisions behind a game I love so much. I’ve played a huge amount of Arkham Horror LCG this year and it’s easily my game of the year, vying for that most coveted of positions with my passion for Blades in the Dark.

The preview series of articles I did for UK Games Expo was my most intense undertaking of the year requiring a lot of reading of sites and writing up the individual exhibitors as best I could. Although it was really useful to me to identify the folks I did and didn’t want to see I don’t think I’ll be doing exactly the same thing again this year. This was my first con I had been granted a press pass for and so I went overboard in my coverage but now understand that I don’t need to produce so much to feel that I have justified the price of admission.

The article I am probably most proud of is also my saddest: the demise of the Tabletop Cafe in Edinburgh. I still miss that place a lot. I like to think that article also marks a turning point in my writing style, as I had to put more of myself into it to explain how I felt about the loss of the venue. Everyone, including the owners of the business, really liked what I wrote and it encouraged me to let my personality come through in my writing.

The Name of the Game

Although the breadth of my games consumption hasn’t been particularly broad this year I have played a fair amount. Weekly roleplaying and LCG sessions have seen me engaged in a Shadowrun 5th edition campaign as Geist, an amoral Face, and tackling horrors man was not meant to know in the Arkham Horror LCG. The reboot of Netrunner has also seen me coming back to that game, which I loved for a long time, and I hope to get in more of in the coming year.

On top of playing in Shadowrun I have been GMing 3 games, 2 Blades in the Dark games and an ongoing game of Pendragon where I have undertaken the Great Pendragon Campaign, a 90 year epic covering Arthurian legend from before his birth to after his death. One of these days I’ll figure out how to write up my experiences with that particular monster but I can tell you this: by the time we finish it it’s likely that one of my player’s kids will be old enough to join us as a player, read that how you will.

My list of recorded boardgame plays lies in my BGG collection, and I’ve been trying to keep track of stuff better as I discuss in my article here. I hope to be even more accurate next year so I can properly purge my collection of anything that hasn’t been played. My Wednesday gaming group is very tolerant of me trying out new things on them, which I am eternally grateful for, but the uptick in the number of games I have for review probably means I am going to need to seek out some other players, likely the Friday night meetups run by the Edinburgh Board Gamers.

What’s next for The Giant Brain? I’ve already stepped up the amount of articles I am getting up on the site, aiming for two a week, which I’m occasionally going to miss and if I can’t keep up the quality I’ll have to reassess. I’ve joined the Board Game Exposure group of reviewers which will give me a lot more practice at writing reviews, mostly covering games from US publishers.

It’s my intention to review all the games in my collection over the course of the year, partly to help me in weeding out the ones I don’t really play or want anymore. My recent article on the matter showed that I had a lot more games than I thought and I really need to see if I can cull the herd further. The amount of games I have means I probably won’t have reviewed everything by the year’s end but I hope to have gotten through a lot.

I’m going to be diving into the world of interviews next year and already have my first 3 lined up: Sarah Kennington of One Free Elephant, Thomas Pike of Themeborne and Mark McKinnon of Wreck and Ruin. I’m hoping to feature an interview once a month alongside my regular content, and the focus will be on UK publishers and designers, preferably near to a release or Kickstarter campaign.

This is where I really want to take the blog in the new year: deep into the UK gaming scene. I want to talk to publishers and designers I don’t know, highlight the games that aren’t getting the press they deserve and help to promote the best the industry has to offer to as wide an audience as I can muster. If you are a UK publisher or designer with a release in 2018 reading this article then please do get in touch, I’d be delighted to feature you on the site.

Together we can move this thing

Of course no man is an island, or in this case, no blog. I am extremely grateful to all those who have read, commented on and shared my work over the last year. When I first started out on this project I wasn’t sure anyone would want to read my work, so however you support me you have helped me grow in confidence which makes me want to put out the best content I can. I’ve recently set up Patreon and Ko-Fi accounts so if you would like to help support me getting to more cons over the coming year you can do so.

It’s been a good year for me in general and I am really looking forward to taking on more challenges over the course of the next year, helping out UK publishers and designers and playing a wider variety of games than I have in previous years.

Hoping you had a great Christmas and a happy New Year